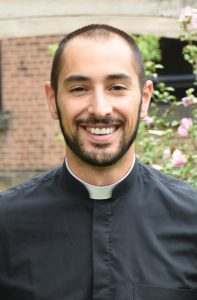 Jordan Hainsey is an award-winning graphic designer and illustrator.

While at Saint Vincent he assisted the curator of Saint Vincent Gallery, Brother Nathan Cochran, in a wide range of endeavors, including gallery exhibits and work with the Nationwide Juried Catholic Arts Competition and Exhibition, which has received international attention. Father Hainsey’s work included designing the exhibition booklets. He has also received acclaim for his artwork, which was chosen by acclaimed jurists for inclusion in the exhibition.