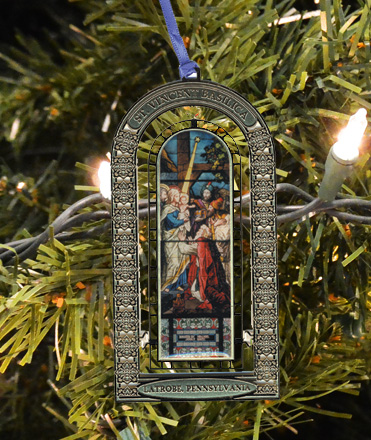 2000 Saint Vincent Archabbey Basilica Christmas ornament. Third in the series is Adoration of the Magi, based on the stained glass windows in the Basilica.

2000 Saint Vincent Archabbey Basilica Christmas ornament. Third in the series is Adoration of the Magi, based on the stained glass windows in the Basilica.

The Saint Vincent Archabbey Basilica Christmas ornament series started in 1998, with the design of a metal ornament by Father Vincent de Paul Crosby, O.S.B., featuring the facade of the church. This version of the facade, long out of stock, was repeated in 2002, two years after steeples were added to the front of the church, completing the original design of architect William Schickel.

The ornaments in the series are:

There were also a series of three ornaments done in a series for the Saint Vincent Gristmill, some of which may still be available in limited quantities:
Gristmill Painting (out of stock)
Miller’s Cross above the Millstone
Wheat and Holly Berries with Archabbey Coat of Arms