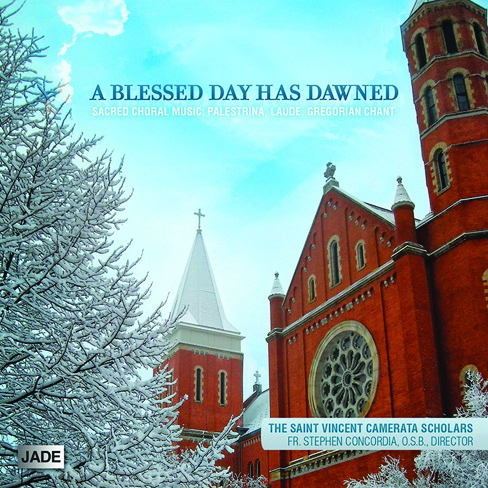 A Blessed Day Has Dawned is the inaugural recording by the Saint Vincent Camerata Scholars under the direction of Father Stephen Concordia, O.S.B. The musical program revolves around the Mass setting for the day of Christmas by Giovanni Pierluigi da Palestrina (1525-1594). Entitled “Missa: Dies Sanctificatus”, the Mass is based on his Motet of the same name.

A Blessed Day Has Dawned is the inaugural recording by the Saint Vincent Camerata Scholars under the direction of Father Stephen Concordia, O.S.B. The musical program revolves around the Mass setting for the day of Christmas by Giovanni Pierluigi da Palestrina (1525-1594). Entitled “Missa: Dies Sanctificatus”, the Mass is based on his Motet of the same name. As an example of the popular Renaissance form of ‘imitation Mass’, the musical themes of the Motet are recycled throughout the various parts of the Mass: Kyrie, Gloria, Creed, Sanctus, Agnus Dei. The artistic aims of unity and economy of musical means are thus put at the service of the liturgical prayer, creating a composition of great variety of musical forms all held together by the frequent allusions to the Motet themes throughout the Mass. The Palestrina Mass is at the center of the CD, but other styles are also present. “We wanted to fill in the other Mass parts in Gregorian chant: the Introit (entrance), the Alleluia, the Gospel of the day, and the Communion antiphon. This evokes what a Renaissance Mass might have sounded like, with some parts sung in polyphony, and others chanted,” said Fr. Stephen. Also on the CD are three “Laude Spirituali”, popular songs written by contemporaries of Palestrina for the informal gatherings of the Oratory of Saint Philip Neri.

The Camerata Scholars, formed in the Summer of 2011, includes both veteran members of the Camerata, some of whom have been singing together for over 20 years, as well as newer members, particularly students of Saint Vincent College. They are dedicated to the study and performance of a cappella sacred music in liturgies and in concerts, especially the works of the Renaissance and contemporary periods. Through their performances, educational outreach, and the sponsoring of Choral Scholarships at Saint Vincent College, the Camerata Scholars aim to be a catalyst for a broader and more profound appreciation of the inheritance of Catholic sacred music.

Another CD featuring Father Stephen and the Camerata is Feasts of All Saints and All Souls.

Be the first to review “Camerata Scholars CD, A Blessed Day Has Dawned” Cancel reply